Vladimir Putin Trolls West: 'If I Want, I will Take Kiev in Two Weeks

por A-24, em 07.09.14
Via Breitbart
Russia President Vladimir Putin told outgoing European Commission President Jose Manual Barroso he could take Kiev, Ukraine in two weeks if he wanted to, according to a report in Italian newspaper La Repubblica. This latest threat surfaces just days after Putin allegedly told Russian youths that Kazakhstan never earned its independence.
According to La Repubblica, Barroso asked Putin about Russian troops in Ukraine. Barroso told the EU that Putin said, “If I want, I will take Kiev in two weeks.” Repubblica’s Alberto D’Argenio said Putin is telling the West not to make him angry with threats of new sanctions against Russia. 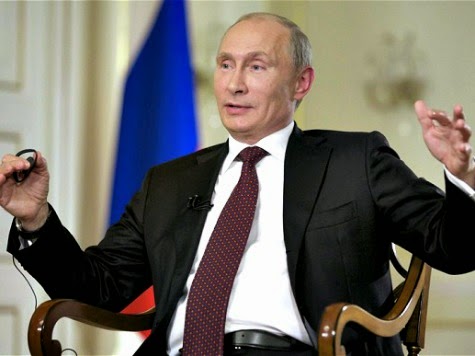 Tensions between the West and Russia continue to rise, as more information reveals Russian soldiers in east Ukraine with the separatists. British Prime Minister David Cameron and German Chancellor Angela Merkel once again repeated threats of tough sanctions against Russia if the Kremlin did not stop violating Ukraine’s sovereignty.
But Putin is not just eyeing Ukraine. Putin is an ex-KGB agent and once said the fall of the Soviet Union was the greatest geopolitical disaster of the 20th century. While Ukraine is the crown jewel of the old Soviet, Putin applies pressure on other ex-Soviet states. Kazakhstan is now worried Putin will target them after he told a pro-Kremlin youth group the country is artificial.
"Kazakhs never had any statehood; he [Kazakhstan’s President Nursultan Nazarbayev] has created it," he said.
Nazarbayev immediately fired back with his own threats.
"Kazakhstan has a right to withdraw from the Eurasian Economic Union," he said on television. "Kazakhstan will not be part of organisations that pose a threat to our independence."
"Our independence is our dearest treasure, which our grandfathers fought for," he continued. "First of all, we will never surrender it to someone, and secondly, we will do our best to protect it."
Nazarbayez signed the Eurasian Economic Union along with Belarus on May 29. Unlike other ex-Soviet states, Kazakhstan does not rely on Russia for gas and energy needs. It is its own star in the energy world, and the deal was signed in Astana, which is known for energy production.
Kazakhstan was the last Soviet state to leave the Soviet Union. The Kazakhs declared independence on December 16, 1991, and finalized their independence on December 25, 1991. Nazarbayev has been Kazakhstan’s only president for the past two decades.
Putin has a history of not acknowledging the independence of ex-Soviet states. In 2008, the same year he invaded Georgia, Putin told President George Bush that Ukraine is not a state.