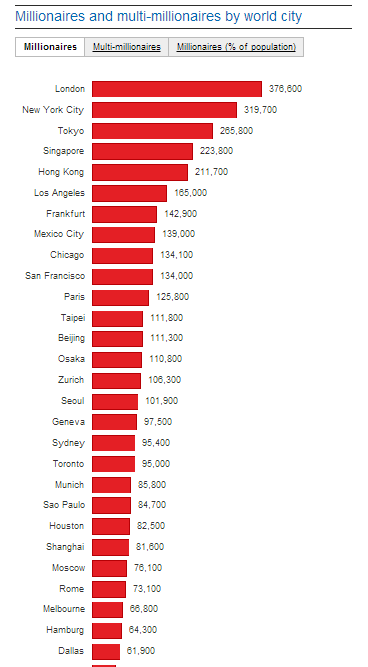 London is the millionaire capital of the world, with almost 3% of the population commanding more than $1m in net assets, according to a new study.
The city’s 395,600 dollar millionaires put it top of the list compiled by Johannesburg-based wealth consultancy New World Wealth. A report last year by rival WealthInsight ranked London third behind Toyko and New York.
Hong Kong comes out on top of the list for multi-millionaires (defined as individuals with at least $10m of net assets) with 15,400 – but only ranks fifth on the millionaire list.
Andrew Amolis of New World Wealth points out that in Russia, high net worth individuals (HNWIs) account for more than 60% of total individual wealth in the country – double the worldwide average of 30%. The consultancy uses a number of sources including public director and company databases, as well as luxury goods databases focusing specifically on art, private jet, prime property and yacht buyers. It excludes primary residence, but includes other property assets.
The number of multi-millionaires worldwide has grown by 71% over the past decade, while millionaire numbers have increased by 58%. This phenomenon can be put down to factors including a rising rate of millionaires climbing into multi-millionaire status, and a widening wealth gap at the top-end of the spectrum, the report said.
A per capita breakdown of the figures shows the Swiss cities of Zurich and Geneva top that list: 7.8% of Geneva and 5.8% of Zurich residents are millionaires. New York sits in 10th place, with millionaires making up 1.6% of its population.
The rapid increase in the number of millionaires and multi-millionaires worldwide – to 13 million and 495,000 respectively – has left specialists looking for new definitions to suit these individuals. Ultra high net worth individuals (UHNWIs) are defined as those with net assets of at least $30m, while centimillionaires have at least $100m.