Immigration in France: No need for 'Mr Ebola'

por A-24, em 02.06.14
Via  The Local
As the National Front's Jean-Marie Le Pen courts trouble by suggesting the Ebola virus could solve the immigration problem in France, the author of a new OECD report on immigration in Europe says it's no longer even a significant phenomenon in France.
As expected, given that he is vying for re-election as a member of the European parliament on Sunday, Jean-Marie Le Pen, the controversial honorary president of France’s anti-EU National Front party voiced his opinions on immigration this week.
Le Pen, who has been convicted of hate speech on numerous occasions, could be up in court again after suggesting the deadly Ebola virus could solve the global “population explosion” and thus Europe’s “immigration problem”.
“Mr Ebola could sort it out in three months,” he told journalists at a cocktail party before an election rally in Marseille. His words were later condemned by the government.
Le Pen went on to tell supporters his concerns that the French population risked being “replaced by immigrants”.
“In our country and in Europe we have known a cataclysmic phenomenon – a migratory invasion that we are only seeing the beginning of today.
“This massive immigration risks producing a real replacement of populations,” Le Pen said.
Le Pen’s words may strike a chord with his National Front supporters who are expected to help see the party gain a record score in this week’s European Elections, but they come as a new report revealed the number of immigrants heading into France represents only 0.4 percent of the population. 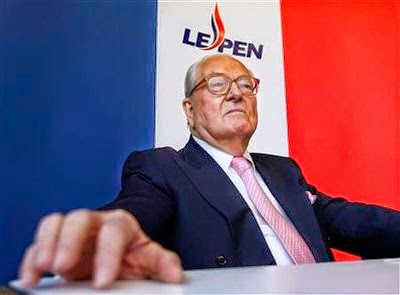 The Paris-based OECD think tank published a report that looked into whether migration really is increasing in Europe and while it revealed the permanent migration into France reached “a historical high” in 2012 it’s “no longer a significant phenomenon”, especially when compared with other OECD countries.
“Contrary to what most people believe migration to France is fairly low,” Jean-Christophe Dumont, from the OECD’s International Migration Division told The Local. “Immigrants coming to France in 2012 represented only 0.4 percent of the population, which is much lower than the OECD average of around 0.8 percent.
Some 241, 900 permanent immigrants arrived in France in 2012, compared to 399, 900 in Germany and 282, 600 in the UK, according to the OECD.
“There’s a gap between the perception and reality when it comes to the importance of migration - 200,000 to 250,000 might sound like a lot of people but as a percentage of the population it's not,” he said.
The study also revealed that in 2012 a total of 925 000 EU citizens emigrated to another EU country, up 12% over the previous year. For its part France saw an 11 percent rise in EU citizens settling in the country.
Dumont says one of the reasons why immigration to France remains low is the country’s policies, which means it is harder to for people to settle here.
“It’s not like in Sweden where pretty much anyone with a job can get a work permit, bring their spouse over and then be nationalised within a few years,” he said.
“Migration also responds to opportunities and the economic profile of a country, which explains why more people headed to Germany than France,” Dumont said.
Dumont added that France still has a need for migrants to come in order to fill jobs in certain sectors like construction and care.
With far right parties like Pen’s calling for borders to go back up across Europe, the subject of immigration has once again become a political football in the run up to the EU elections.
But Dumont, says the studies show that France still benefits from its immigrant population.
“No study has ever shown that migration was not beneficial for France,” he said. “In certain sectors like hotels, construction, and the care industry, immigrants are needed to fill vacant jobs because there is an employment gap,” he said.
He says many people make judgements about the number of immigrants in France by wrongly including second generation migrants, who were actually born here.
“That’s why certain people find it very easy to make these negative, populist statements,” Dumont said.
Jean Marie Le Pen however is unlikely to take note of any of this as he hopes to take his seat in Strasbourg once again.
Esta página utiliza cookies. Consulte a nossa Política de cookies.