por A-24, em 28.10.14
...o que ganharia Portugal se não atrasasse o relógio?
importante visto que Portugal tem a mesma hora do Reino Unido
The clocks change tonight: five reasons to keep Daylight Savings Time all year
In the early hours of Sunday morning, clocks fall back an hour, marking the end of British Summer Time. Here are five reasons why daylight savings time should be adopted all year round.
Technicians carry out cleaning and maintenance work on one of the faces of the Great Clock atop the landmark Elizabeth Tower that houses Big Ben
In the early hours of Sunday morning, the clocks jump back an hour, making the mornings lighter and the evenings shorter. Lobbyists have been decrying this chronological curse for years now, urging policymakers to adopt Daylight Savings Time - also called British Summer Time - on a permanent basis, prioritising sunlit evenings over bright mornings. This would essentially align UK watches with clocks on the continent. 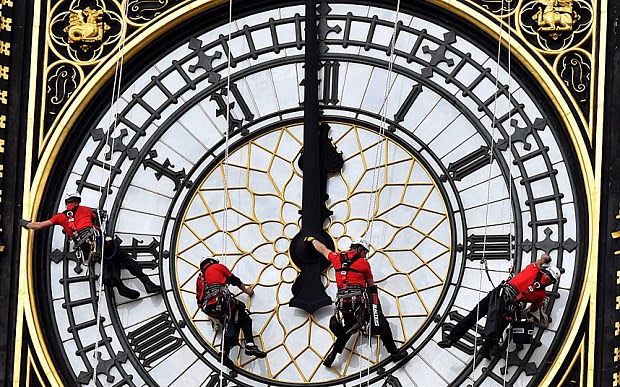 In 2011, Conservative MP Rebecca Harris floated a bill calling for year-round daylight savings. A YouGov poll that same year found that 53pc of Britons supported moving clocks forward an hour permanently while 32pc opposed the change. The proposals were met less warmly by the Scottish population; Alex Salmond called the campaign an attempt to “plunge Scotland into morning darkness.”
The complaints are founded; the sun wouldn’t rise until 10am in parts of Scotland. The country’s 1,000-or-so dairy farmers, who wake up before 5am, would have to work for hours in the dark. Other farmers and construction workers, who need sunlight to perform their jobs, would end up working later into the evening.
Of course, we could all just get up an hour earlier in the morning, regardless of time. But as the economist Milton Friedman pointed out, in an analogy for foreign exchange rates, it’s easier to change one thing - the time, in this instance - than dozens of habits of thousands of people.
Here are five economic reasons in favour of Daylight Savings Time.
1. Think of the energy savings
Conserving energy was one of the main reasons summer clocks were moved forward in the first place; Britain changed its clocks during the Second World War to help save electricity and boost working hours. A report from the Policy Studies Institute estimated that consumers could save £260 million a year on electricity bills - and that was in the mid-1990s. More recently, researchers at the University of Cambridge found that an extra daily hour of sunlight in winter could save £485 million each year, as people use less electricity and heating. That has the same effect as eliminating the carbon emissions of 70,000 people. Elizabeth Garnsey, the academic behind the report, estimated that 0.5pc of Britain’s energy production is currently wasted in winter months. “This is because it tends to get light in the mornings before most people are awake for quite a large part of the GMT period, whereas everybody is up and about in the early evening," she said.
2. Think of the business benefits
Moving clocks forward by an hour would bring the UK in line with Central European Time, which means London would work the same business hours as Brussels, Paris, Frankfurt and Milan. For business that operate internationally, this could cut down staff overtime costs - not to mention any confusion over scheduling, from conference calls to deliveries. It would also give the UK an extra hour of overlap with Beijing, Tokyo and other major import and export markets in Asia.
3. Think of the safety improvements
Though some parents have voiced concerns about children travelling to school in the dark, winter daylight savings could improve safety on the roads and reduce crime. A three-year experiment to keep British Summer Time year-round, held between 1968 and 1971, found an 11pc reduction in road casualties in England and Wales during the hours affected by the time change - and a 17pc reduction in Scotland. There are roughly 50pc more fatal and serious injuries among adults travelling during evening rush hour than the morning peak, and three times as many injuries among children. An extra hour of evening daylight could save the NHS £200 million a year in accident related costs. In addition, the Home Office believes crime would see a 3pc drop, as crime is more likely to be committed in the evening than in the morning.
4. Think of the tourism boost
Lighter and longer winter evenings could provide an annual boost of £3.5 billion to the tourist industry, according to the Tourism Alliance. The yearly income boost from the 60-80,000 extra jobs this would create could amount to £720 million. Business would be inclined to stay open longer, while tourists and locals alike would have more time in the day to spend on outdoor recreational activities. A report from 2010 claimed people would gain 235 hours of post-work daylight each year. “The tourism industry has been crying out for extra daylight saving for years,” said Conservative MP Rebecca Harris.
5. And if that hasn't convinced you, think of British sports
The Football Association, The Lawn Tennis Association and the England and Wales Cricket Board have all backed year-round daylight savings, and with good reason. The extra hour of daytime increases the time available for exercise, makes people more likely to attend evening sporting events and means professional athletes can train for longer. In the 1980s, the golf industry estimated that one extra month of daylight savings could generate up to $400 million (£246.6 million) a year in extra sales and fees.
Daylight Savings Time “affects everything from Mid-East terrorism to the attendance at London music halls, voter turnout to street crime, gardening to the profits of radio stations,” said David Prerau, author of Saving the Daylight: Why We Put the Clocks Forward.
This debate stretches years into the past, and the future of British time is still unclear. With this discussion - as with the larger outcome of the independence referendum - only time will tell. Until that time, however, it's probably best to change your clocks back an hour this weekend.